giant earthquake that struck Chile in 1960 triggered tsunamis that spread across the Pacific Ocean and caused mass amounts of casualties in faraway Hawaii and Japan. In response to the lack of any exchange or sharing among countries of information that could have been used to predict and warn of the approach of a tsunami at the time, the development of a monitoring system was pursued under the direction of the Intergovernmental Oceanographic Commission (IOC) of UNESCO beginning in the mid-1960s. The Japan Meteorological Agency has contributed to international efforts to monitor tsunamis through the operations of the Northwest Pacific Tsunami Information Center. 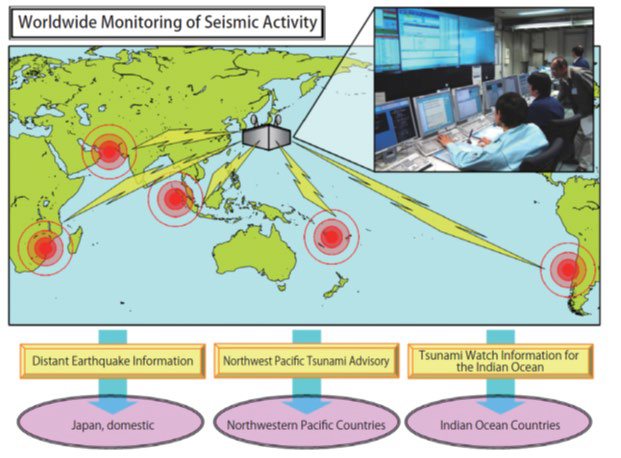 Monitoring of Waves on Land and Seafloor (MOWLAS)

The National Research Institute for Earth Science and Disaster Resilience amalgamated a land-based seismic observation network established in the wake of the Great Hanshin-Awaji Earthquake Disaster of 1995 and a sea-based observation network established after the Great East Japan Earthquake of 2011 to create a network known as the MOWLAS (Monitoring of Waves on Land and Seafloor) network, whose operations were launched in November 2017. The high-quality data obtained from this large-scale and dense observation network contribute significantly to the creation of academic research results that collectively serve as an excellent research base; are used for the monitoring of seismic activity, long-term evaluation of earthquake occurrences, and prompt issuance of emergency earthquake reports and tsunami warnings by the Japan Meteorological Agency; and are being used to demonstrably benefit society, such as through links with private-sector operators to make sure that bullet trains are properly controlled in a disaster. MOWLAS observational data and dramatic advancements in real-time data processing technology in recent years are making it possible to directly mitigate ongoing earthquake disasters. 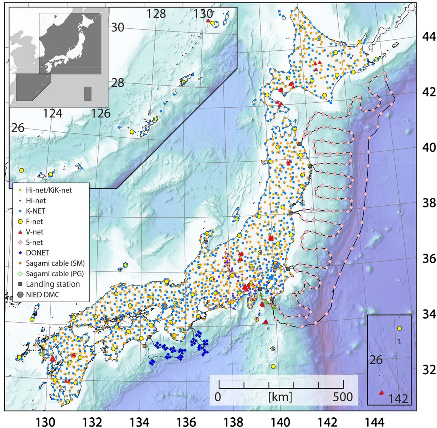