Mounted on the Shikisai satellite, a multi-wavelength optical radiometer can observe concentrations of chlorophyll-a, concentrations of suspended solids, colored dissolved organic matter, the temperature of the water at the sea surface, drifting algae, and more with 250-m spatial resolution and 19 observation wavelength bands. Observational data obtained are generally published for free and contribute to the monitoring of changes in the distribution of phytoplankton, eutrophication, and the distribution of high-water temperature areas due to climate change and more accurate predictions of the ocean environment through comparison and assimilation with numerical models. 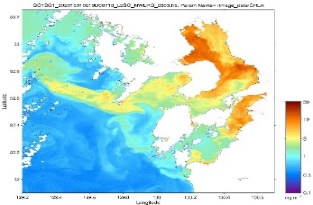 Distribution of chlorophyll-a concentrations at 250-meter resolution in the southwest section of Kyushu on October 1, 2020, as captured by multi-wavelength optical radiometer SGLI aboard the Shikisai satellite
At the time, red tides were reported in the northwestern part of the Ariake Sea (https://akashiwo.jp/); concentrations of chlorophyll-a can be seen to be high in the corresponding area of the sea (red arrow). 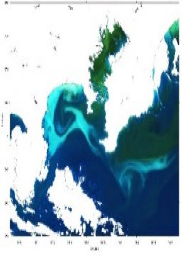 An RGB composite image for the area around Sagami Bay on May 17, 2020, which was produced in accordance with atmospherically corrected sea surface reflectance values for red, green, and blue wavelengths as obtained by multi-wavelength optical radiometer SGLI, which is mounted aboard the Shikisai satellite
White areas correspond to land and clouds. The distribution of white tides that appeared in Sagami Bay at the beginning of May was captured (light-blue area indicated with the red arrow). The image data were made available to researchers and the general public and also covered by newspapers and other media outlets.
Reference: Shikisai Portal (Satellite Applications and Operations Center of the Japan Aerospace Exploration Agency, https://shikisai.jaxa.jp/）

Mounted on the Shizuku satellite, Advanced Microwave Scanning Radiometer 2 (AMSR2) has continued to carry out observations as part of the AMSR series since the launch of the AMSR-E in June 2002. Boasting the world’s highest spatial resolution among microwave scanning radiometers, the AMSR2 is notable for its ability to observe the surface of the earth and the surface of the ocean through clouds and is capable of observing, among other variables, sea surface temperatures, sea ice concentration levels, precipitation amounts, amounts of accumulated water vapor, snow depths, and moisture content in soil. Obtained observation data are publicly released free of charge, are used by meteorological agencies in countries around the world, and contribute to the monitoring of changes in sea ice caused by climate change, the monitoring of ocean conditions, the monitoring of fishing grounds, and the enhancement of the accuracy of predictions concerning the ocean environment through comparisons and assimilation with numerical models. The AMSR3, successor to the currently operating AMSR2, is under development for a launch set to take place in fiscal year 2023. 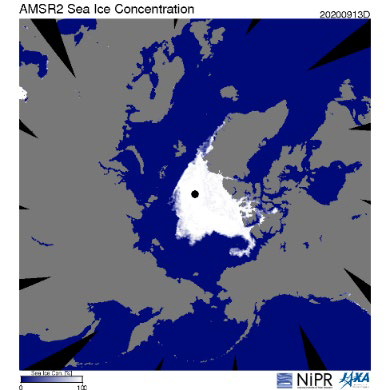 Sea ice distribution at the North Pole on September 13, 2020, as captured by AMSR2 aboard the Shizuku satellite
The minimum extent of sea ice coverage in 2020 (3.55 million square kilometers) was recorded on this date and a press release jointly held by JAXA and the National Institute of Polar Research. This annual minimum value was the second-lowest minimum value observed by a satellite in history after a minimum value that was likewise observed by AMSR2 in September 2012. Changes in polar sea ice coverage is an important benchmark for global warming. Microwave scanning radiometers, which can observe through clouds and around the clock, are an observation tool that is essential for polar research. 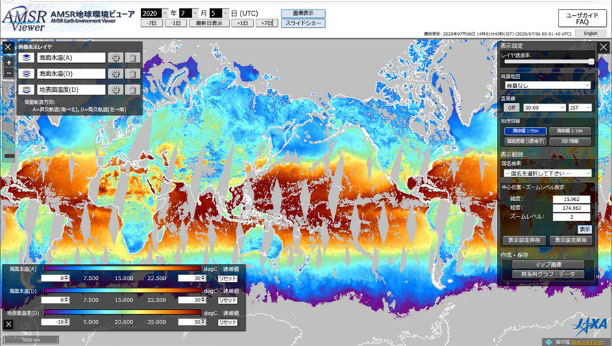 An example of a display as provided by the AMSR Earth Environment Viewer, a tool to visualize observation data obtained by the AMSR series
Offers various functions to enable a user to, among other options, superimpose multiple physical quantities, zoom in and out, display data in pixels, and display time series.
Reference: Global Change Observation Mission-Water (GCOM-W1) satellite (Satellite Applications and Operations Center of the Japan Aerospace Exploration Agency, https://suzaku.eorc.jaxa.jp/GCOM_W/index_j.html）